After the MV Benita, a bulk carrier headed to the South African city of Durban, was grounded on June 17, Five Oceans Salvage (FOS) was brought in to refloat the casualty after removing the 145 tons of fuel onboard the ship. Due to the harsh conditions, ropes made with Dyneema® were the only option both strong enough and light enough to help refloat the vessel.

Following the grounding incident, FOS was brought in to assist with the salvage efforts, along with the support of the ship owner’s underwriters and the Mauritian authorities. The primary aim of the operation was to maintain the vessel in its grounded position and prevent it from running further aground, while simultaneously removing the bunkers from onboard. Efforts were further complicated by Benita’s location on top of the reef, where surf waves ranging from four to eight meters high formed – making an approach by sea impossible for the salvage tugs.

Both of FOS’ salvage tugs are equipped with 64mm steel towing wires. However, due to the grounding of the Benita, the vessel had no power and the shallow water in the surrounding area prevented the salvage tugs from getting closer than 200 meters to the ship. Without power on the receiving vessel side, the only way for the salvage team to connect the tugs to the casualty, and hold the Benita in position for refloating, was by using ropes made with Dyneema® – which were light enough to be handled by the salvage crew and transported by helicopter. 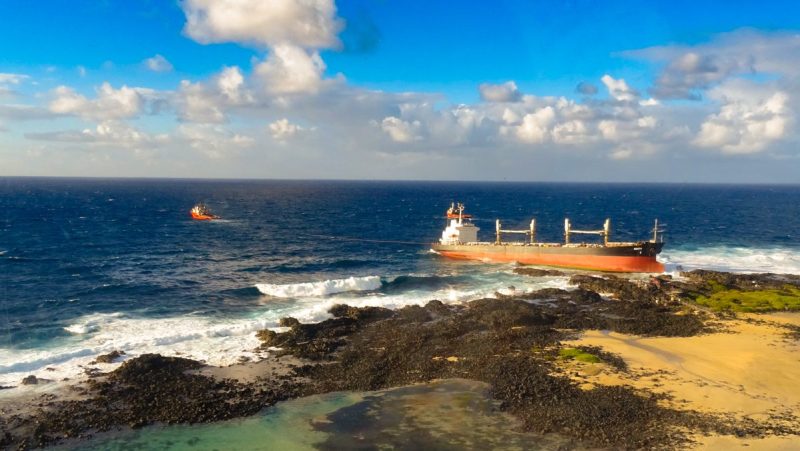 Weather proved to be an ongoing challenge throughout the refloating efforts. In fact, two tugs were connected to the Benita at all times in order to ensure no further running aground occurred.

“Since the bad weather prevented us from getting close to the vessel, the only option was to transfer ropes to the ship by helicopter,” says tug master Captain Kyriakos Goudas. “Ropes made with Dyneema® were the obvious choice; light enough for the job, while providing the strength we needed for the refloating efforts.”

The crew was able to easily attach the ropes to the vessel due to their lightweight and ease of handling. 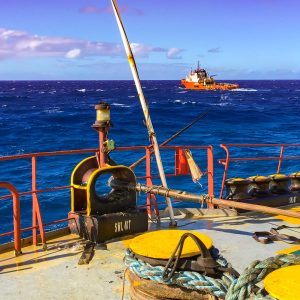 “The ease of handling of the ropes made all the difference in the refloating efforts,” says Goudas. “Ropes made with Dyneema® sped up the operation, without compromising the safety of my crew.”

Both vessels carried a 400mtrs x 64mm; 300 ton MBL Kapaneema Plus rope made with Dyneema® and manufactured by D. Koronakis S.A. In addition to the inherent advantages of Dyneema® fiber, the rope’s dual-color jacket allowed the crew to identify, and remove, twists within the towing line, while still protecting the Dyneema® core.

“We have been extremely satisfied not only with the breaking load, but also with the longevity of our Kapaneema Plus ropes,” says the Engineering Department of D. Koronakis S.A. In fact, the staff admits that they are astonished to receive and re-test rope that maintains its original properties after 10 plus years in use.

On July 23, almost exactly five weeks after the MV Benita wrecked off the coast of Mauritius, the vessel was successfully refloated.  Although a successful refloat this story does not have a happy ending as on July 30th the vessel sank on route to Alang in India.

Based in Greece, Five Oceans Salvage is an international salvage, towage, wreck removal and emergency response contractor that’s been operating worldwide since 2007.